The weather outside is frightful…OK, not like winter frightful, but it’s been on and off thunderstorms all day.  Poor Honey doesn’t know what to do with herself and tonight, we had a really large buck standing in our backyard eating peaches from our peach tree.  Apparently the peaches were a little bit sour, as he would chew them and spit them out, then pick them back up, and try again.  Maybe he thought the second time around it wouldn’t be so bad.  He was a real beauty, and looked like he had either eight or ten horns in velvet.  My dad would have loved seeing something like that, as he was a big hunter, and like “spotting” deer just as much.  For those of you who aren’t familiar with “spotting,” it’s when you (and I’m not making this up) have a huge “flashlight” that you plug into the outlet in your car, and you drive around, looking in fields at night, for deer.  The light looks like this and can virtually light up an entire field, front to back. 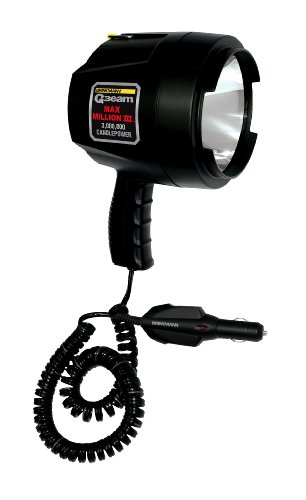 I grew up in a rural area, and the kids always had the first day of deer season off school.  I know it sounds odd, but if you live in a rural area, most of the boys, and some of the girls, don’t attend school that first day, so the school districts incorporated it into their schedule.

My dad loved driving around counting the number of deer he saw.. Since he never hunted near our house, I always wondered what thrill there was in watching deer, but now as I get older, I realize that any wildlife are amazing, and I’m sure it was their sheer beauty that drew my father to them.

As for us, we don’t want any deer to starve, so the day after Thanksgiving, we start feeding them corn, and feed them until there are leaves on the trees, as we know that’s the type thing that deer will eat in lieu of corn.  Our herd has been has high as twenty-five, but in the last few years, we haven’t seen large numbers at once…more like three to five at a time.  We might still get the large numbers, but not all at once any more.

I would love to finish another video tonight, but the sky is a weird yellowish-grey color, so I think I might check the weather channel to see if we have any weather warnings, and go to the basement with the rest of my clan.

I did work on one project today….I’m making a frame for my nephew’s wedding and will be sure to show it to you on video…The lady that’s making the vinyl and I spent an hour or so hashing out the plans for it, and I should have my vinyl next week…I’m looking forward to finishing it and moving on to the boutonnieres I need to make.